An image from a 15th Century French Book of Hours, located in the Rare Book Collection. 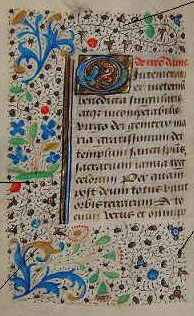 This manuscript was donated to the library by Herbert C. Lipscomb, who called it "the gem of my collection."

Rare Book Collection
The Rare Book Collection was established in the 1930's, with most of the texts being donations from Herbert C. Lipscomb, former Chair of the Classics department for whom the Randolph College library is named.  The collection includes examples of Sumerian cuneiform, illuminated manuscripts, and printed books dating back to the late 1400's.

Letters, Manuscripts, and Photographs Collection
Items in this collection were primarily donated by alumni and trustees, and includes letters from John Randolph, manuscripts by Pearl S. Buck (R-MWC 1914) and Frances Parkinson Keyes, and a portfolio of photographs of well-known individuals which was donated to the library by the Washington D.C. alumnae chapter.

Limited Editions
This collection is a subset of the Rare Book Collection, but contains titles of modern publications with only a small number of copies in print, or featuring unique illustrations or prints.  One example includes a copy of Aristophanes' Lysistrata, which was illustrated and signed by Pablo Picasso.

The collections listed in this section are located on the 5th floor of the Lipscomb Library in the Robert C. Watts Rare Book Room.


Materials in Lipscomb Library's special collections cannot be checked out, but members of the Randolph community and visitors to campus can access them by appointment. To schedule a visit or consultation, contact the library.